The Gift that Keeps on Giving

You probably know this already—because with the growing popularity of veggie gardening, if you don’t grow zucchini yourself, one of your neighbors or relatives does, and has palmed off numerous oversized squashes on you. And maybe you’ve “regifted” that zucchini to everyone you know, but you still have so much around you feel if you eat any more of it you’re going to hurl—and the season’s just starting. Here on Berryridge Farm, when I harvest the first zuke of the summer, I feel a bit celebratory. For one thing, I really like zucchini. Also, I know I’ll save money by not needing to buy veggies at the store, and I’ve solved the dilemma of what vegetable to cook for dinner for the next six weeks. 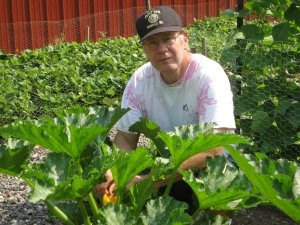 Our zucchini patch may be more productive than most, because my husband John likes to help out in the fertilizing department. Instead of depending on our resident pollinators, like the bees, butterflies, and hummingbirds to transport pollen from the male squash flowers to the female fruits, John offers couples’ therapy. Here he is, getting the girls and boys together.

You’re probably thinking, why in the heck is John helping more zucchini grow, when everybody knows you always end up with more than you can eat? I guess we’re both eternal optimists. (Besides, my Boomer memory isn’t what it used to be, and it keeps slipping my mind that at one point last September, I counted twenty zukes in the fridge.) In case you, like us, have a bunch of zucchini on hand (and you’re still willing to eat it), and you’re looking for an easy way to use up a LOT of it, roasting is the way to go.

Cut your zukes into chunks, toss them with olive oil, garlic powder, salt and pepper and load them into a 9 x 13 glass baking dish. If you’ve got some fresh basil—conveniently, the basil is growing like crazy in August too—sprinkle some leaves on the top, then bake at 350 degrees until the chunks are golden and a little crispy. Besides being delicious, the zucchinis have obliged you by shrinking to about a fifth of their original size. You’re able to get rid of 2 or 3 nine-inch squashes and end up with barely enough to feed two people.

Still, you zucchini growers out there will do well to heed my standard advice: Pick early and often (and don’t forget to check under the leaves!) or you’ll end up with something like this baseball bat-sized specimen. 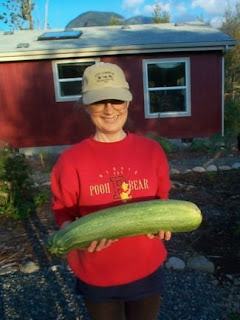 Posted by Susan Colleen Browne at 1:05 PM No comments: