In winter, there's another challenge with simpler country living that I call "Homestead Hygge." Hygge, the Danish concept of “conscious coziness” as TIME magazine calls it, is sort of like socially-acceptable couch potato-ism: curling up on your sofa with a warm quilt, bathed in candlelight, and drinking of mug of hot cocoa, which leads to greater happiness and well-being. Upon hearing about Hygge (pronounced HOO-gah) last January, I was so entranced by this whole cozy lifestyle I blogged about it (see my January 31, 2016 post with a recipe). I soon learned that you can practice Hygge by choice. Or not.

During a recent, protracted power outage at Berryridge Farm, John and I were all about Hygge—because we had to be. Without electricity, life gets a little too basic. But over the years we’ve gotten pretty well prepared for a power-less life, at least for a few days.

With our woodstove, we can stay warm, plus heat up food on the top (after moving the kettles). We’ve got two 5200-watt generators, one for the well pump, and the other for the house and shop. Both can be connected to a “Gen-Tran” a kind of power transfer system that allows you to take your electrical system off the grid and connect it to your generator. 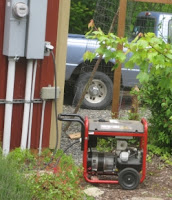 During an outage, if we run each machine for an hour or two each day, we have enough power to 1) Have a minimal amount of water for cooking, flushing the toilets, plus filling the hens’ waterer, and 2) Run the refrigerator and shop deep freezer to keep the contents from spoiling. The generator connected to the house also allows us to briefly use the kitchen range and microwave, but you can only turn on one at a time! You’ll know if you’ve given your generator too much of a load: it’ll start “lugging”—making sort of a laboring noise—so you’ll want to shut off any of your bigger power-consuming appliances.

We were sort of under-powered when it came to house lighting, however, especially since the outage took place during the darkest days of the year. My small, LL Bean solar lantern proved woefully inadequate, the light dimming after only a few minutes. Some years back, John and I gave up on large flashlights that need several “D” batteries, but John did have a couple of weeny flashlights on hand so we could find out way to the bathrooms. To keep the house a little more cheerful, not to mention adding more of a Hygge vibe, I lit a few beeswax candles. Between those and my headlamp, the light

was enough to read by, so a bookworm like me was a happy camper.

We generally keep our fridge and pantry well-stocked during the wintertime, so food wasn’t an issue. Luckily, we also had a good supply of soup in the freezer, leftovers from a soup-making kick I’d been on over the holidays. John had a plentitude of meat jerky, one of his son’s holiday gifts, and definitely a boon for a carnivore when you can’t cook any meat. All in all, we came through the three power-less days without too much inconvenience, if you don’t count giving up your daily shower.

Our closest neighbors didn’t fare as well. Their generator repair guy was planning to come out to service their machine, then a blizzard hit the Foothills and our road was impassable. They’ve got a significant little poultry operation of turkeys and chickens, and by Day Two of the outage, they had to collect snow melt off their metal roof to keep the birds watered. What they did have was a pair of LED lamps you recharge via a USB port, and John and I vowed to buy one or two for next time.

Our biggest challenge: John had had hernia surgery three weeks before the outage. After waiting out 24 hours without power, we couldn’t put off getting the generator going. Worried about him pulling the generator starter cord, I gave generator-starting my best, super-duper effort. Problem: I could NOT start that dang generator to save my life. I just don’t have the upper body mojo. Fortunately, John was able to carefully pull the cord without straining his surgical site, and get the machine online. Even for a lover of peace and quiet like me, when we’re without power, the roar of our generator is music to my ears.

The secret to power-outage Hygge is all in the preparation. First of all, forget having elective surgery from November through February! (Note to self: I clearly need to up my strength-training game.) Also, get your generator serviced in the early fall, and start it once a month or so to keep the engine in good shape. And remember to keep a few gallons of fuel around too!

As it turned out, this outage was well-timed: John still had lots of “Christmas cheer” on hand—two bottles of wine he’d gotten for holiday presents. As he poured his first glass of local raspberry wine, he said, “You know, the booze makes you not care so much about the power outage!”

Find free books and more about my country-set novel, The Galway Girls, at www.susancolleenbrowne.com!
Posted by Susan Colleen Browne at 7:29 PM No comments:

To start off the New Year, I'm giving the gift of reading--you can enter to win 1 of 100 ebook copies of The Galway Girls, Book 4 of my Village of Ballydara series, starting January 16, 2018! Here's more about my new novel:


Two friends search for their heart’s desire in this small-town romantic story set in Ireland. Kerry has fallen in love all over again with her husband Stephen, and after their miscarriage, she longs to try for another baby. But will her long-held dream of having a farm bring an end to her marriage?

Her best friend Fiona has left her free-spirited life behind her. Or so she thinks—until she finds herself caught between Dublin artist Colm, the man she was once mad about, and the sweet, youthful passion of Davie, who can see the woman she’s meant to be. Follow this warmhearted tale of women’s friendship and love lost and love found among the misty green hills of the Galway countryside!

Discover more book freebies and learn more about my Ballydara series at www.susancolleenbrowne.com!


Posted by Susan Colleen Browne at 7:45 PM No comments: