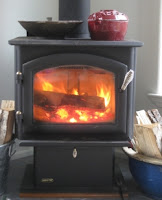 Garrison Keillor says, “I’m thankful to live in a place where winter gets good and cold and you need to build a fire in a stove and wrap a blanket around you. Cold brings people closer together.” He was talking about Thanksgiving, but as Christmas draws nearer, and the winter’s chill sets in, John and I like to spend our evenings lolling on the couch in front of the woodstove. You see, when it comes to holiday celebrations here at Berryridge Farm, it’s all about cold management.
Since we moved out to the Foothills, our gift-giving has taken a practical turn. We don’t generally buy stuff for ourselves, so when it comes to holiday gifts, we tend to splurge/catch up (whichever way you see it) with the items we needed but didn’t buy all year. And no malls or big-box shopping for us—we want quality items that will last. Our first fall here, when we got the woodstove up and running, the warmth was wonderful, but inside the house was drier than the Mojave. So that Christmas, our gift to each other was a cast-iron steamer for the top of the stove, from LL Bean. It was only the beginning.
Given our budget, LL Bean prices are sort of a luxury for us, but they’ve become our Secret Santa. Subsequent Christmas gifts have included two sets of flannel sheets, a wonderfully fuzzy fleece blanket, and a heavy-duty fleece vest for John. With all due respect to the Beanster’s, I confess that one Christmas, I did go to their competition (Land’s End) and get myself a pair of silk long johns.

This holiday season, we’re taking our winter’s warmth to a whole new level. A few weeks ago, I got myself an early Christmas gift: Gore-Tex waterproof mittens. So long, popsicle fingers—winter in the Foothills has never been so good! We recently came across this mail-order outlet with a hilarious catalogue, but the stuff they sell is absolutely great: The Duluth Trading Company. John’s gift is a pair of “Fire Hose” work pants (the product motto: “We Dare You to Wear ’Em Out.”). Still, my guess is John will give them a run for his money. Especially since in his efforts to keep us warm, he has dared to wear out three wood-splitting wedges in two years. So our family gift this year is a Fiskars splitting ax, which has a sharp edge that flares out like a V. My previous wood-splitting attempts haven’t been pretty, but I’m going to give splitting another try with this puppy. Also thanks to the Duluth folks (who actually operate out of Belleville, Wisconsin), the icing on our Christmas cake is a Japanese hatchet John just ordered. I like to think we’re all set for wood hand tools, but you know how guys are…

So, once our warmth needs are taken care of, it’s time for the real holiday fun: Baking! While holiday goodies probably make Dr. Oz cringe, I like to think baking with organic flours, sugar, and eggs from our own hens means Berryridge cookies aren’t quite as unhealthy as they could be. Besides, we all deserve to indulge ourselves a little this time of year.

For Christmas gifts to my family, I always make multiple batches of shortbread (full of butter, but low on sugar!), gingersnaps (with two heaping teaspoons of ginger, they’ve got to be good for one’s digestion!), and frosted sugar cookies (there’s absolutely nothing healthy about them but they’re tops on the list). Last week, I found a recipe in Sunset Magazine for pecan balls, which are simply butter cookies with toasted chopped pecans. I baked my first batch last night, and they are melt-in-your-mouth yummy! (Oh, and healthy too, with those pecans!). I’m also adding fudge to my repertoire, after I found a recipe that uses half-and-half (I’ve got some lovely local stuff in the fridge) instead of marshmallow cream.

But you know, to make the holidays special, there’s something better than sturdy, well-made stuff to help you stay warm, better even a houseful of fresh-baked goodies. It’s the spirit of generosity.

I was in the post office last week, to mail our Christmas package to John’s kids—it’s a small-town P.O., where you rarely have to wait. But on this day, there was only one counter open, with at least a dozen folks in line with parcels to ship. A little family stepped up to the counter, a thirty-something mom, a pretty young teen, and a little girl, all with the same shade of blond hair. The mother’s soft voice was slightly accented—Russian, I guessed (there’s a sizeable Russian immigrant community in our part of the county). They had a couple of bedraggled boxes to send out. The post office guy added up the postage, then affixed the stickers to the boxes. “Ready to go,” he said. “That’ll be $27.53.”

The mother swiped her debit card, and the reader emitted a sharp tone: a “no” in machine-speak. The postal worker, very polite, had her swipe her card again—same result: the machine wouldn’t accept the card. Then he swiped it—nada. Next, he attempted the transaction go by entering her card number into his system. Still, the card was a no-go.

“I’m sorry,” he said, sounding honestly sympathetic. “I’m going to have to tear the stickers off, unless you can come back in a few minutes with cash or check.” Despite all the people lined up, the lobby was silent—you couldn’t help but hear the mother’s soft, embarrassed murmurs. Then all of a sudden, a woman stepped up to the counter. “I’ve got it.”

“Random act of kindness,” the woman said. “I’ve got it.” She literally would not let the mother say no. The tension in the little family eased. The post office guy took the card and you could see him visibly relax too; in fact, everyone in the lobby relaxed. The guy next to me in line said, “There’s been a lot of that lately—random acts of kindness. It’s been on the news.” In that moment, I felt the holiday spirit pervade the entire room. This generous woman I’d never seen before and would likely never see again totally made my Christmas.

A half hour later, still feeling a little teary from the kindness I'd witnessed, I was listening to the radio and Garrison Keillor and his “Writer’s Almanac” came on the air. After reciting his usual notable birthdays, and a lovely poem, Keillor shared a final thought. A quote by Arthur C. Clarke, who said, Think of how peaceful the world would be “if we all treated each other as if we were members of the same family.”

There you have it, in a nutshell: Christmas at the post office. “…and on earth peace, good will toward men.” Merry Christmas!
Posted by Susan Colleen Browne at 7:42 PM No comments: