Holly the Border Collie and her Irish Farm

In the hills of western County Mayo lies Glen Keen Farm—which means “gentle glen” in Irish. At the farm, you’ll find a culinary school, tearoom and bakery, petting zoo, and of course, loads of sheep. But the heart and soul of the farm is Holly, sheepherder extraordinaire.

During our time on the Emerald Isle, I decided the whole of Ireland seems like one big sheep farm, with a few towns and cities dotting the island. I understand that in this country of 4.6 million people, there are nearly 4 sheep for every human! On our travels on the west side of Ireland, I saw sheep being herded by four-wheelers, but when you’re running sheep on steep hillsides, motorized vehicles just don’t cut it. That’s where sheep dogs come in. 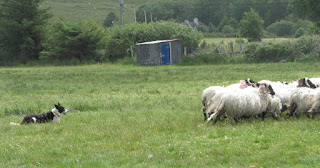 Which brings us back to Holly. This is a girl who really loves her job. On our visit to Glen Keen Farm, she was the main attraction. When she wasn’t actively herding sheep, she would crouch, one eye on her master, the other on the sheep, poised for the next command. As I understand it, on many sheep farms, the call, “Come away” or “Away” means herd the sheep counter-clockwise, and “Come around” or simply, “Around” means herd clockwise. Jim, the farm’s co-owner explained that Holly couldn’t distinguish between “away” and “around.” So instead of calling “Around,” Jim would call “Come by.” However, Holly, not just being any old border collie, could understand French! Jim also used the calls, “à droit” (to the right) and “à gauche” (to the left) when the fancy struck him. And Holly understood perfectly!

Jim called Holly his best friend—after all, they spent every day together, all day. At his command, she would explode into action. She could get fifty sheep into a pen within a minute or two. Or she could pick one sheep out of a crowd and into a separate pen just as quickly. Sometimes she couldn’t contain herself, and she would start herding even when she was supposed to wait. But at the command “Stay, Holly,” she would instantly stop whatever she was doing. Well, almost instantly. Watching her, I was thinking she would stop herding only with the utmost reluctance. Or to humor Jim. You pick. 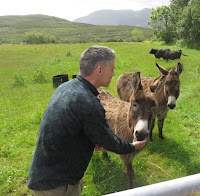 Holly and the sheep weren’t the only animals on the farm. We visited the farm’s petting zoo, that included a few hens in a small mobile coop, and one enormous pig. She had her own pen, and a few people braver than I gave her a pet. Another pasture held two donkeys and a pair of Dexter cows. Dexters are a small breed about half the size of the beef cattle we see in the US, and are known for being good for both milk and meat. Jim didn’t mention what the farm used these cows for, only joked that he was scared of them. 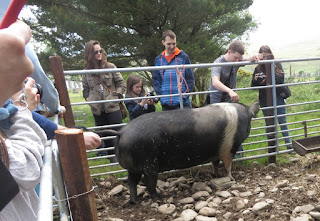 After watching Holly’s sheep herding, we had lunch in Glen Keen’s tearoom—basil tomato soup (excellent), ham and egg salad sandwiches, mini-baguettes and buttered scones with jam on top. (Carbs, I found, are big in Ireland!) After lunch we got a brief Irish step-dancing demo from a young lad and lass, and an older fellow did a bit of a clog-shuffle dance. Still, I think the best “dance” of all was watching Holly’s fancy footwork on the hills of Glen Keen Farm.

Visit the farm online at www.glenkeenfarm.com!