I was eighteen the first time I tasted rhubarb.

It was my inaugural family dinner at my boyfriend’s grandma’s house. Grandma R. was German, and as I soon discovered, she was a stupendous cook who put on a country-style spread every Sunday afternoon. My own family’s standard dinner was a plain baked pork chop, an equally plain baked potato, and frozen mixed vegetables, so Grandma’s groaning table was a revelation.

I looked in awe at the platter of pot roast, an oversized bowl of mashed potatoes and gravy, a basket of homemade biscuits, cooked broccoli, two relish trays, and a tossed salad. A couple of platefuls later, after stuffing myself into oblivion, I wasn’t prepared when she brought out dessert. Or shall I say, the dessert course. There was homemade chocolate cake, ice cream, and two rhubarb-strawberry pies. With my first bite of the tart-sweet pie, all I could think was, “Rhubarb…where have you been all my life?”

So this spring, it was with great excitement that John and I watched our rhubarb patch grow from a pink, bulby-looking thing poking through the soil to a three-foot wide, ready to harvest marvel. This week, I picked nearly five pounds of rhubarb, with the juiciest, deepest crimson stalks I’d ever seen. Within hours, half of it was baking in a crisp, combined with a quart of frozen strawberries left over from last summer’s harvest.

Given the uber-tartness of rhubarb, any way you fix it generally requires scads of white sugar to make it palatable. And if you’re baking rhubarb crisp, by the time you factor in the brown sugar topping, a decent-sized serving can put you in a sugar coma. Personally speaking, crisp will invariably give me the sugar shakes. But I wasn’t about to pass up on this treat. So for this early season, sure-to-be-sweet picking, I got adventuresome: for 2 ½ pounds of rhubarb as the fruit base, I used a combination of about 1/2 cup of locally produced honey and real maple syrup, plus a scant 1/3 cup white sugar. And guess what? It was plenty sweet, with no sugar-reaction!

With the remaining rhubarb, I made a compote for our breakfast fruit—note: if you’re watching your sugar intake, the addition of some cubed organic apples helps reduce the need for too much sweetening. You also can find some great rhubarb recipes at my sister Patricia’s blog, Comfort Dish.

If you have any room in your yard for food-growing, you might consider planting a rhubarb crown ($8.95 at our local Foothills nursery). It’s a no-fuss crop if there ever was one—it needs only a little compost once in a while, and regular picking. What’s more, after the first year, it produces all summer long—without making a pest of itself, like the aforementioned zukes. The last time I priced organic rhubarb in our local co-op, it was $3.98 a pound—which means for fifteen minutes of picking in my own patch, I wound up with $20 of fruit!

Here’s our rhubarb patch, after picking. 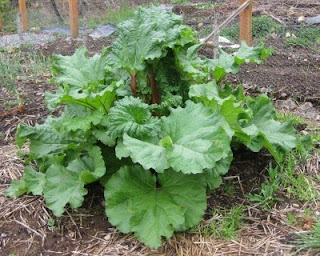 Posted by Susan Colleen Browne at 12:34 PM No comments: