From my last post, you can see that all is not sweetness and light here at Berryridge Farm. Because this summer, John and I turned into the perpetrators instead of the perpetratees.

You see, the varmints had been in the strawberry beds.

Because of our chilly May and June in the Foothills, the strawberry season had been really late. So four weeks ago, when I spotted the first perfect, plump red berry, I was eagerly anticipating my first taste. I had to spend the day in town—I was presenting at a writers’ conference—but I knew this luscious berry, safe under the netting, would be protected from our resident robins. Then, the next morning, I hustled to the bed to pick the berry, but it was…gone.

A chipmunk, of course. They’d become regular visitors to Berryridge Farm in the last year. I admit, they were fun to watch, scampering through the yard, fast as lightning. Then we realized where all that scampering was leading.

Last summer, we’d seen one run right through the berry nets, and I’d gotten pretty ticked off to find berries scattered here and there, some with bites in them, some not. But this year, after that first berry disappeared, I realized that Chip had become much more destructive. I’d go out to pick, and find smashed berries covering the large rocks ringing the bed. Half-destroyed berries were strewn everywhere, mostly the biggest, ripest ones. We even found strawberries littering the woodsheds, where he’d obviously set up housekeeping.

You may be thinking, c’mon, what’s the big deal? How much can a chipmunk really eat?

As it turns out, a lot. It was eating our berries as fast as they were ripening. And since we’re trying to grow as much of our own produce as we can, we were counting on the berries for not only our fresh summer fruit, but to freeze for supplementing our winter food stores. “Chip,” I told John, “is ruining our crop. We’ve got to do something.”

A friend had recommended peanut butter bait, so John dutifully set out a couple of rat traps. All of which were ignored. Chip had also grown bolder, scurrying all through all the garden beds, always leaving smashed berries in his wake. In fact, when we’d get close enough to try to shoo him back into the woods, he’d give us a look like we were bothering him.

Then, after a week or so of trap setting, we were once again trying to shoo Chip away. But instead of darting into the woods, he clambered up our house foundation, and disappeared behind the siding. Meaning, he could be moving his household from the woodpiles to inside our walls! That was it. The. Last. Straw.

John came up with a new strategy: traps baited with peanut butter, with a ripe strawberry on the top. Could Chip resist this confection? Soon after, from the house I saw a chipmunk racing into the garden. It halted mid-stride, and did a somersault, tail switching, his whole body flip-flopping madly. “John,” I called, “there’s a chipmunk in the yard, acting very weird.”

Outside weeding, John found it immediately, and as I watched, he speared it with his handfork. I turned away, wincing. I’m the kind of person who can’t watch even the mildest violence (if there is such a thing). So my relief at catching our resident thief was tempered with regret, that John had to resort to hand-to-hand combat. After he’d buried the chipmunk, I met him out in the yard. “You okay?”

“It looked like its back had been broken.” John looked down. “I had to put it out of its misery.”

“Oh, Honey,” I said, feeling a little sick. “That must've been grisly.”

“It’s hard to kill something when you’re looking ‘em right in the eye,” John said heavily. “I mean, I always liked chipmunks--I grew up watching ‘Chip and Dale’ in Bambi.”

“I hear you,” I said, patting his shoulder. Back in the 60s, I’d watched “Alvin and the Chipmunks,” myself, so I’d been fond of these little woodland critters too. But at any rate, Chip was gone. So our problem was solved.

Next post: Collateral Damage, Part II.
Posted by Susan Colleen Browne at 12:22 AM No comments:

Homicide at the Little Farm 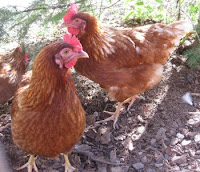 I'd just returned from town around dinnertime and found John outside...in his underwear.


Because John's always been the conventional type, not inclined to cavort out of doors in his muck boots and undies, the underwear alone was cause for concern. But when I saw the shovel in his hands, I felt a twist in the pit of my stomach. "The hawk?"
He nodded somberly, "I didn't get there in time."
Earlier that day, before I left, I'd seen a red-tailed hawk swoop over the chicken yard and settle on the fence post. I bolted outside, waving my arms. "Go on! Get away!" The hawk lazily took off, as if not the least bit intimidated by my yelling. Meanwhile, our six hens had taken shelter beneath a young Douglas fir, and there they stayed, quaking in terror.
I returned to the house to get ready to leave, but before long, the hawk was back, alighting on the fence again. Same drill: I ran into the yard, shouting, but this time, the bird only gave me an insolent stare with its beady eyes. It didn't even blink. Really mad now, I picked up a chunk of wood and hurled it at the hawk. With my pathetic aim, I didn't expect to actually hit it, and sure enough, I didn't. But my flimsy weapon seemed to have done the trick. The hawk flew off toward the deep forest next to our woods.
I figured the chickens were safe, under the tree. So did John. Still, while I was away, he'd worked outdoors most of the day, so he could keep an eye on things. Near sundown, he'd decided the "girls" would be okay, and went in to take a shower. Half-dressed, he'd looked out the dining room window, and saw the hawk in the yard, standing over a hen. A dead one. John raced out, and threw a big stick at the hawk - and at least had the satisfaction of running off the hawk before it had a chance to eat its kill.
When I arrived, he'd just buried the chicken. For two days afterward, the traumatized hens wouldn't leave their coop. Both of us feeling sad and guilty, John and I vowed to protect our five remaining girls a lot better. No more unsupervised roaming around the yard from dawn til dusk, whether we were home or not. From now on, we would only let our chickens out of their fenced-in coop area - a 10' X 10' "cage" of poultry and utility wire - when we were outside too.
The hawk hasn't been back. We like to think that since John prevented it from enjoying that delicious chicken dinner, it figured, why bother coming back for another try? I suppose in the larger scheme of things, we've been lucky. The hens haven't been molested by your usual chicken predators, like foxes, raccoons or coyotes. Still, I've gotten into the habit of scanning the sky, and checking the compost area for animal sign.
And keeping in mind that when it comes to wildlife, the operative word is "wild."
Posted by Susan Colleen Browne at 5:38 PM No comments: