Recipe for a Fairy Tale

Mix in a treasured photo of a baby girl dressed in a fairy costume, tiny wings on her shoulders. Add a bunch of fairy lore books, a fairy snow globe and other figurines, and make sure to include the ceramic fairy king with the bemused smile sitting on the bookshelf. Blend well and let let simmer for a few months. Then as the holidays approach, with a Eureka! moment, pour all the ingredients onto the page. The dish? Morgan Carey and The Mystery of the Christmas Fairies, a story of a magical woods and family bonding. 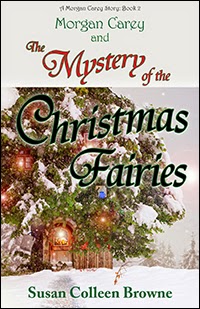 In Book 2 of the Morgan Carey series, Seattle fifth-grader Morgan makes a holiday visit to her grandparents’ house in the foothills of the Cascade mountains. While Morgan thinks her grandma and grandpa are great and everything, they live way out in the boonies, with no cable TV or even cell phones! Then on Christmas Eve, she’s stuck looking after the three young step-cousins she hardly knows.

Babysitting the unruly little kids during a jaunt in the woods, Morgan and her cousins are lured into an entrancing, mysterious forest, where they encounter unexpected adventures…and even dangers. Morgan must draw upon all her strength and ingenuity if they are to escape this magical world, and find their way back home for Christmas.

Now on Amazon, this heartwarming, family-friendly tale is for kids, grandparents, and anyone who is young at heart!

I hope you're having a wonderful holiday, and I wish you the best for the New Year!

Susan
Posted by Susan Colleen Browne at 1:30 PM No comments:

Do you enjoy stories that, while not really scary, make your spine tingle a little? I love collecting mystical stories myself, especially Irish ones.

Here's my favorite: The mother of a creative writing student of mine had an Irish grandmother, whose surname was Quinn. This mother, an American, had recurring dreams all her life of an old castle ruin with crumbling steps. Later in life, she went to Ireland on a tour, and the bus stopped at a castle. She saw those same steps she’d seen in her dreams. The name of the castle? Castle Quinn.

And another one: a friend of mine, an Irish-American author, recently took her first trip to Ireland. Before the aircraft landed, she gazed down at the green hills of Ireland below and was completely overcome by the conviction that she belonged there. The sensation was so powerful, she said, she felt like she could have jumped right out of the plane.

I found another story I loved in the memoir Midlife Irish, by Irish-American journalist Joe Gannon. During his first trip to Ireland, Gannon says he felt this overwhelming sense that heaven, or the life beyond this one, was as close as the next room.

What do these stories have to do with Christmas, you may ask?

They remind me that Christmastime—and the entire holiday season (whatever holiday you may be celebrating)—is brimming with magic and mystery.  How else do you explain the story of St. Nicholas?

He was a real-life bishop in 4th century Turkey, who became the patron saint of children. Later, this historical figure became mythical—a benevolent spirit who left treasure and gifts in children’s shoes…or stockings. This mythical presence soon evolved to include Father Christmas, Santa Claus and other magical beings throughout other countries and other cultures—all of whom represent the spirit of love and generosity.

And children around the world believe in this magical spirit as strongly and as fervently as they believe in anything, long after they’re old enough to know the difference between reality and make believe. When I was 7 years old, I was sitting with my grandma in our basement rec room, watching The Laurence Welk show. I heard some thumping upstairs, and soon after, my dad called to us and said Santa had just left gifts for everyone. As I tore up the stairs, I believed…no, I knew it was Santa who’d made that noise and left those presents. There was simply no other explanation.

Which relates to the best holiday quote ever: “Seeing isn’t believing; believing is seeing.” (Judy the Elf, from the movie The Santa Clause).  Why not believe in the angels among us, in the messages from our ancestors, or in the miracles that took place in ancient times?

Charles Dickens wrote, “The dreams of childhood…its airy fables, its graceful, beautiful humane, impossible adornments of the world beyond; so good, to be believed in once, so good to be remembered when outgrown.”

So as long as you believe, believe that all things are possible, everywhere you look you’ll find the magic and mystery of the season…truly the holiday gifts that keep on giving.